Hi Everyone!
We hope you’ve recovered from Snowmaggedon 2018 and are back to your most productive and creative selves. Via social media, we saw new projects cast on during THE winter storm of the century (until the next one, that is) and loved how makers in our greater fiber community got busy! We cast on a new project ourselves (more below).

A side effect of blogging is a greater awareness of all things trivia and how it is all somehow related. For instance, during the holidays and into the new year, “wassailing” is often mentioned. What exactly is wassailing? Like many, we thought wassailing was simply caroling with adult libations in hand and found, while that’s true, that’s not the whole fleece of it.

The word wassail comes from Old English /was hál/  related to the Anglo-Saxon greeting /wes þú hál/ meaning “be you hale” (i.e. “be healthful” or “be healthy”). It is a perfect salutation or toast for the new year. Wassail, y’all! 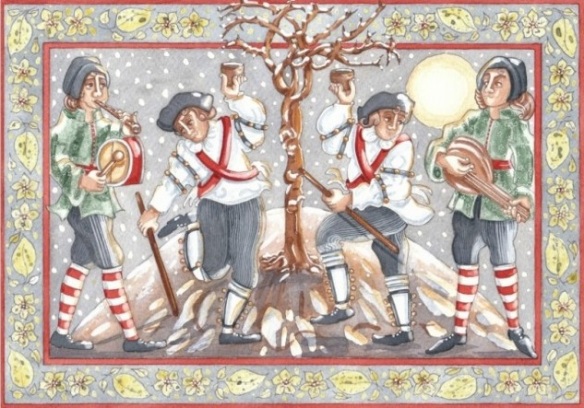 Wassail: The Beverage
Wassail is a hot, mulled punch often associated with Yuletide drunk from a “wassailing bowl.” The earliest versions were warmed mead into which roasted crab apples were dropped and burst to create a drink called “lambswool” (Whaaaat? See a great post on wassailing and beverages including those known as lambswool or “mutton and wool” here.) drunk on Lammas day, still known in Shakespeare’s time. Later, the drink evolved to become a mulled cider made with sugar, cinnamon, ginger and nutmeg, topped with slices of toast as sops and drunk from a large communal bowl.

Modern recipes begin with a base of wine, fruit juice or mulled ale, sometimes with brandy or sherry added. Apples or oranges are often added to the mix, and some recipes also call for beaten eggs to be tempered into the drink. Great bowls turned from wood, pottery or tin often had many handles for shared drinking and highly decorated lids; antique examples can still be found in traditional pubs. Hence the first stanza of the traditional carol the Gloucestershire Wassail dating back to the Middle Ages.

Wassail! wassail! all over the town,
Our toast it is white and our ale it is brown;
Our bowl it is made of the white maple tree;
With the wassailing bowl, we’ll drink unto thee.

Wassail: The Lambswool
Lamb’s whool or lambswool is a variety of wassail made from ale, baked apples, sugar and spices.

Next crowne the bowle full
With gentle Lambs whool,
Adde sugar, nutmeg, and ginger,
With store of ale too,
And thus ye must doe
To make the Wassaile a swinger.

Irish antiquarian Charles Vallancey proposed that the name “lambswool” was a corruption of the name of a pagan Irish festival, “Lamas Ubhal,” during which a similar drink was had. Alternatively, the name may derive from the drink’s similar appearance to the wool of lambs. (Sounds lip-smacking good, doesn’t it?!) Ale is occasionally replaced by ginger ale for children, especially around Halloween and New Year.

Wassailing: The Culture
In the cider-producing counties in the southwest of England (primarily Cornwall, Devon, Somerset, Dorset, Gloucestershire and Herefordshire) or southeast England (Kent, Sussex, Essex and Suffolk), wassailing refers to a traditional ceremony that involves singing and drinking to the health of trees on Twelfth Night in the hopes that they might better thrive. The purpose of wassailing is to awaken the cider apple trees and to scare away evil spirits to ensure a good harvest of fruit in the Autumn.

The ceremonies of each wassail vary from village to village but they generally all have the same core (apples, anyone?) elements. A wassail King and Queen lead the song and/or a processional tune to be played/sung from one orchard to the next. The wassail Queen is then lifted into the boughs of the tree where she places toast soaked in wassail from the clayen cup as a gift to the tree spirits (and to show the fruits created the previous year). In some counties the youngest boy or “Tom Tit” (Where is little Johnny Appleseed when you need him?) will stand in for the Queen and hang the cider soaked toast in the tree. Then an incantation is usually recited.

Soo…enjoy your lambswool, your singing and caroling, and be hale and hearty with it all this new year.

Casting On: Fern & Feather Pullover
One of the recent projects we’ve cast on our needles during the recent winter storm is the Fern & Feather pullover by designer Jennifer Steingass. The pattern is one of five in ‘Lookbook #4: Puget Sound,’ which is part of the series, “By Hand: Making Communities.”

A top-down Icelandic-inspired stranded yoke sweater. This pullover is worked seamlessly from the top down, starting with a simple rolled neckline. The yoke is knit in stranded color work, then short row shaping is added to the back of the sweater to shape the shoulders and neckline. Gentle waist shaping makes for a flattering, feminine fit. 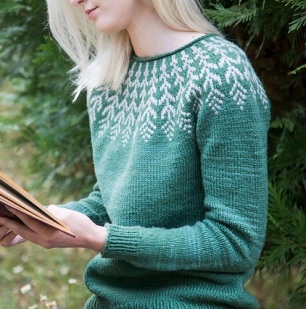 Did YOU cast on any projects during Snowmaggedon? Did you wassail?

Want to know what we’re deweing? Pop in to see our studio wörks on Ravelry, Facebook, and Instagram as well as on our website at thefibrestudio.com.